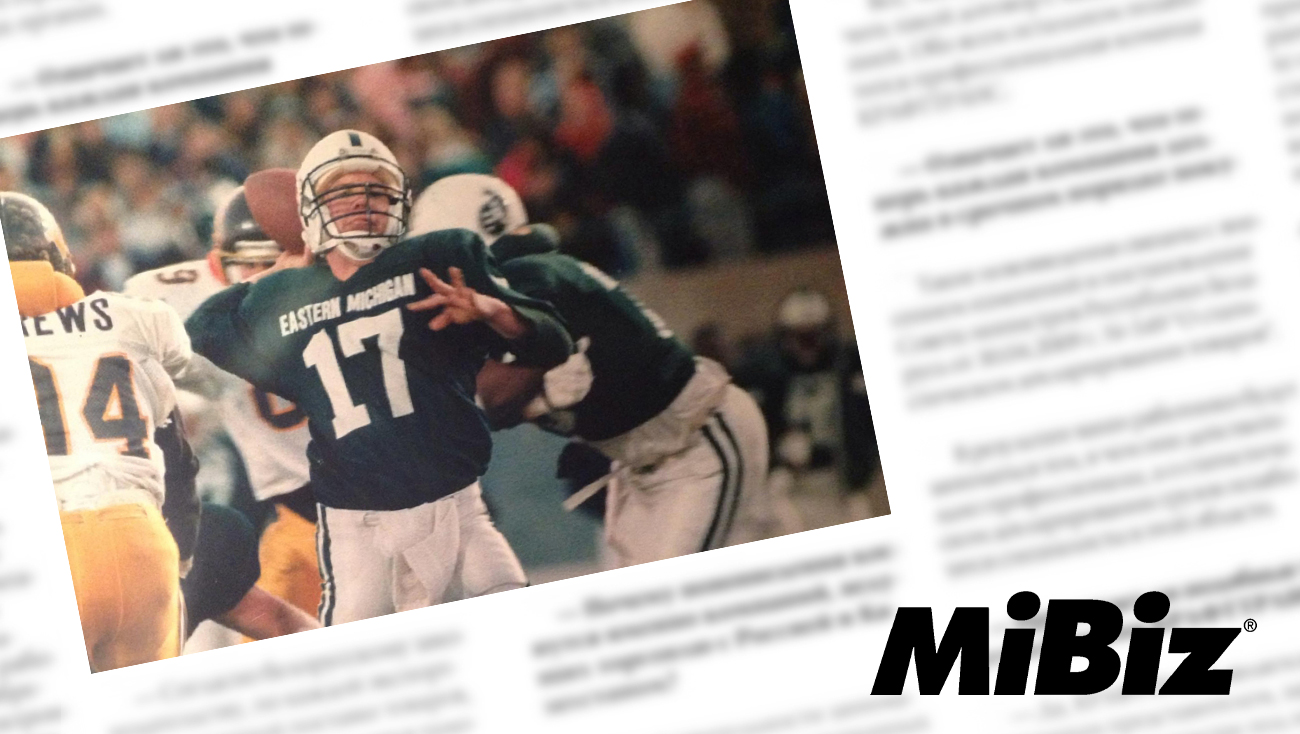 By Jayson Bussa, MiBiz
Keith Mitchell recalled a time during his football playing days at the University of Michigan when he and other players volunteered at a football camp in the Detroit area. The coach hosting the camp charged hundreds of dollars per participant and drew a crowd of roughly a thousand.

“And you know what we got? We got lunch,” laughed Mitchell, who played tight end for the Wolverines from 1985 to 1989.

Mitchell’s story is common. The National Collegiate Athletic Association (NCAA) long had rules that banned student-athletes from receiving compensation for engagements like camps, endorsements and autograph signings, arguing that it would tarnish players’ “amateur” status.

However, that era ended this month with a significant NCAA policy change. Student-athletes across the country are rushing to take advantage of their newfound liberties to profit off of their name, image and likeness (NIL).

To provide resources to other players, Mitchell has even teamed up with a current Grand Rapids-based student-athlete who has millions of social media followers and is considered by most to be the very first athlete to profit off of her NIL. That athlete is his daughter, Chloe.

Beginning on July 1, NCAA student-athletes can now profit off of their NIL, which could include autograph signings, private lessons or endorsement deals.

The NCAA made the historic reversal on this oft-criticized method of its business model after pressure mounted from states that were beginning to sign laws granting this right to student-athletes.

The beginning of the month marked a transformation in the college sports landscape, creating one in which athletes can sign endorsement deals, sell merchandise and hire an agent. However, NCAA rules pertaining to pay-per-play and improper recruiting remain intact.

While no federal NIL legislation has been passed, a variety of states across the country have enacted legislation pertaining to this topic. This includes Michigan’s NIL bill that Gov. Gretchen Whitmer signed into law at the end of 2020 but which doesn’t take effect until Dec. 31, 2022. Until then, individual schools can draft their own NIL policies.

Athletes still face several significant limitations, though. For example, athletes are not allowed to use school trademarks, logos and other intellectual property without the proper licensing approval. Also, student-athletes can’t sign an apparel contract that conflicts with their school’s apparel contract.

The University of Michigan released its NIL policy on July 1. Mostly mirroring the state’s law, the school’s policy allows student-athletes to be compensated for personal appearances, private lessons, sponsored social media posts and autograph sessions, among other engagements.

Michigan State University also released a policy and even developed a program called EverGreen to help its student-athletes learn about developing a brand and financial education.

Western Michigan University did not respond to multiple requests for information on the status of its NIL policy, while schools like Aquinas College, Cornerstone University and Kalamazoo College participate in the National Association of Intercollegiate Athletics (NAIA), which implemented the same overhaul of its NIL rules in the fall of 2020, well before the NCAA made its decision.

Show me the money

Mitchell remains profoundly interested in the NIL topic, and not just because he was a former student-athlete who missed out on the opportunity.

Mitchell’s daughter, Chloe Mitchell, is a former all-state volleyball player who graduated from Western Michigan Christian High School and is now on the team at Aquinas College. She achieved fame on the social media channel TikTok during her quarantined senior year of high school.

Starting with a couple dozen followers, she posted video updates as she fixed up a shed in her backyard — her “She Shed” — and the content took off. She now has 2.6 million followers on TikTok along with 43,600 followers on Instagram.

“It was as organic as it gets,” Chloe Mitchell told MiBiz. “I had 32 followers beforehand and I was just posting videos for my friends and it just blew up, which is the beauty of the app. It’s an app where anybody can blow up.”

That put her in prime position to leverage her following for paid sponsorships and endorsements. But, it also put her at risk of compromising her eligibility within the NAIA, the league in which Aquinas competes.

“I couldn’t announce myself as a student-athlete whatsoever, which also hindered the kind of brands I could partner with,” Chloe Mitchell said.

When NAIA changed the rules during her freshman year, Chloe quickly connected with athletic brands. One golf equipment retailer express-shipped her products so that Chloe could promote them in one of her videos and become the first student-athlete to profit off of her NIL.

She did it through a service called PlayBooked, which Chloe and Keith Mitchell started together alongside company President Ken Konecki and COO Patrick Werksma.

Though the mobile app is yet to be released, PlayBooked is designed to connect student-athletes with brands and other revenue opportunities. When the team fleshes it out, Keith Mitchell said PlayBooked will resemble more of a comprehensive resource that helps student-athletes with everything from forming a limited liability company to planning for tax considerations.

“Our goal is to take it slow and take it steady and not jump into bed with too many people,” Keith Mitchell said.

Mitchell said he plans to base PlayBooked in West Michigan. Meanwhile, the quest for helping athletes get paid has become a rallying cry for his TikTok celebrity daughter.

“My closest friends are athletes, my mentors are athletes,” Chloe Mitchell said. “I just know the sports world so well and I know how often these college athletes have been cheated out of what they so long deserved. Why not be of service now when they need service most?”

Like Keith Mitchell, Tom Sullivan of marketing firm LEAD Marketing Agency Inc. played Division I sports during an era when profiting off of NIL was never front of mind for athletes.

Sullivan, president and owner of the Grand Rapids-based firm, played quarterback for Eastern Michigan University from 1985 to 1989. He called the change in NIL policy long overdue.

“(Athletes) at that time were generally happy with a scholarship and thankful for it,” Sullivan said. “But the whole landscape has changed since then. Look at how coaches’ salaries, for instance, have gone up whatever percent and the students continue to get the value of their scholarship, which is of course valuable but what they have gained has not increased to the level of what the business has done.”

Sullivan isn’t surprised that someone like Chloe Mitchell has been able to land such lucrative endorsement deals now with her mammoth social media following.

The quantifiable nature that comes with social media marketing is attractive for businesses that want to amplify their message. Sullivan pointed to University of Michigan basketball player Adrien Nunez, who has rarely played in his three years with the Wolverines but has 1.5 million followers on TikTok, which positions him to profit off NIL.

“We say it all the time to our clients here that content is king,” Sullivan said. “If you have good content and people like it and they follow you, it doesn’t matter if you play for Michigan basketball or live down the street. There are plenty of social media stars who don’t have the platform, but if you have both, it’s certainly an advantage.”

In developing LEAD Marketing Agency, Tom’s vision was to provide clients with measurable results as it pertains to their advertising and marketing.